Here is the first of the Dark Sword Miniatures completed for our DnD campaign, DSM 4107 - Easley Masterworks - Female Cleric. 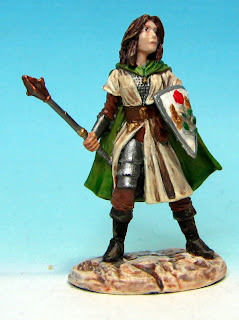 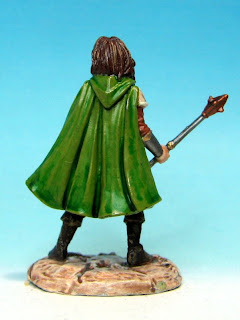 The paint job is not my best, but my friend I painted it for is happy, so I'm happy too. The character is a Cleric of Chauntea, a goddess of nature, so I used browns, beiges and greens on the mini, based on my friend's request.

One of the things I'm proud of on this mini is the shield.  Originally, the shield bears a simple raised triangle in a circle.  This character being a Cleric, I tought she would proudly go into battle carrying a shield emblasonned with her deity's symbol.  So here is what I sculpted with green stuff: 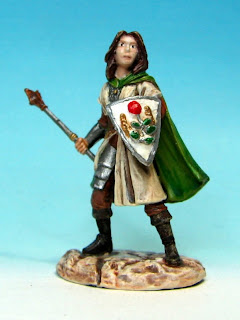 As you can see, it's the same symbol I sculpted with Sculpy and posted a while back.  The miniature looks great on the table, when we fight the evil cultist our DM throws at us.

While I'm still working on the Dark Sword minis, here's a holy symbol I sculpted in Super Sculpey for the cleric player in our DnD party.

Although for his campaign, our DM created his own Pantheon, many of the gods are inspired by the Forgotten Realms campaign setting, including Chauntea. So inspired by this holy picture from a TSR book:


I created and painted this palm size symbol:

Have Stargate, will travel

A while ago, I wanted a cheap prop Gate to use in a game of Stargate d20 RPG (sadly discontinued by AEG).

So I hit the web and found several paper models, including a good looking one from Marco Scheloske.  Now I know that the symbols around the ring are not accurate and all, but it had potential and I liked it. To simplify things a bit, I printed the two faces of the Gate and glued them on foam core.  Carefully cut out, it's nice and sturdy.

Now for the Stand I wanted something a bit more durable than the paper one from Marco.  Then I remembered an article I read on the Reaper Miniatures website, The Craft - How to make a Field Stone Wall. Here's my adaptation of this technique to a stonework Stargate Stand.

First, I drew a plan of what I wanted.  d20 is played on a 1 inch grid, and it is reflected in my layout.
Then using a large kitchen knife and an exacto blade, I cut the shape into a 2" blue foam insulation block.

Then came the cutting.  Each stone was contoured with a fresh exacto blade, in a rough V-channel.  Once this was all done, I used a small stone with sharp edges to texture the whole thing.
After that, I painted the everything with DecoArt "Antique White" and then painted each stone black,
and drybrushed grey, with a black "magic wash".  I added a brown wash here and there at the base of stand.  I also added some static grass, which is shown in the last pic.
Here is the final stand, with the Gate and a force of Jaffas coming through, lead (from behind of course) by Apophis in his golden armour...

Finally, we never played that game of SG RPG, but it was of fun project and it makes a nice display stand for my Jaffas. I guess "build it and they will come" is not always true.


Last year, I started playing in a new DnD campaign DMed by my cousin.  A new campaign means new characters, so I offered everyone to paint a mini of their choice to represent them on the gaming table.

After a few sessions that helped us get a feel for our characters, everyone settled on a miniature from a company I was not familiar with, Dark Sword Miniatures.

So here's the unboxing of the package I got in the mail and my first impressions of the minis.

I am pleased with these minis.  The casting is clean, the detailing really nice and the poses, although a bit static are well suited for role playing purposes.  They remind me a lot of classic fantasy book covers, and they should; most minis from Dark Sword are based on concept art by some of the same artists, like Larry Elmore the original artist for the DragonLance Chronicles books.


The only small "con" I might have about the minis is the fact that some of them are multi-parts, in particular the figther in plate "DSM5030 - Victarion Greyjoy" (the one not assembled on the left). The axe and right arm had to be glued to the body at the same time to insure a proper fit.  Not an easy thing to do at this size.  I might not be 100% objective about this. Although I understand the why of them, I don't like multi-parts minis in general.  When used in games, they're more delicate to handle.

But that's just a minor quip, and I will definitely order from Dark Sword again, once I made a significant dent in the lead mountain.

This year, my teenage son started playing DnD with his friends.  So for his birthday last week I thought I'd get him a miniature for his character.  Subtly, I found out that although he likes my miniatures, he's not interested in trying his hand at painting.  So I decided to go ahead anyway and paint it for him.

His character is a race that can be found in the DnD 4th edition Player Handbook 2, a Goliath Barbarian.

Miniatures representing that race are still quite rare, but I was lucky and found one from Reaper miniatures, Goldar the Barbarian.

To determine which colours to use, I looked at pictures like the one above and the description of the Goliaths taken from this races of Stone Excerpt:


"Goliaths have gray skin, mottled with dark and light patches that goliath shamans say hint at a particular goliath's fate. Lithoderms -- coin-sized bone-and-skin growths as hard as pebbles -- speckle their arms, shoulders, and torso. Their skulls have a jutting eyebrow ridge, wide jaw, and occasional lithoderms as well. Female goliaths have dark hair on their heads, grown to great length and always kept braided. Male goliaths generally have hair only on their limbs. Goliaths' eyes are a brilliant blue or green, and they often seem to glow a little from underneath their furrowed brows."

To paint the skin, I primed the whole mini with black and then applied a base coat of Reaper Pro Paint Granite Grey and Reaper Pro Paint Ash Grey for the dark patches.  I then applied a wash of Citadel Devlan Mud all over.  Turned out OK, but I might get better results next time if I try local applications of Devlan Mud to the shadow areas only.
Another model that would have been good for a Goliath is Gorak the Ravager, again from Reaper, but it was not available yet when I ordered my mini for this project.

That Goldar mini reminds me a lot of Kratos, from the "God of War" game series.  One day I'll order another copy of the model and try a conversion.  And maybe that day my son will feel like putting down is game controller and pick up a brush.
Posted by Simon at 2/16/2011 08:18:00 pm 1 comment:

Here are two "commissions" of sort.

While my little sister was in Montreal in January, my young nephews got themselves some nice Reaper Miniatures and asked me to show them how to paint them.  Turns out time was too short for proper lessons so I did a quick job on the minis before the family went back to Costa Rica.

Below are pictures of the two fantasy adventurers:


Even though the poses are static, the crispness of details and the character of the minis are on par with modern Reaper Miniatures.  I really enjoyed painting them, hope you enjoy them too.
Posted by Simon at 2/15/2011 12:56:00 pm No comments: 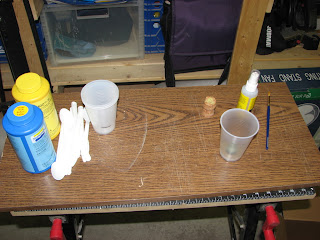 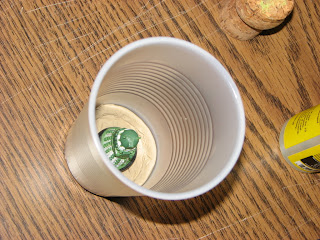 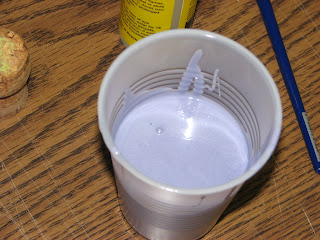 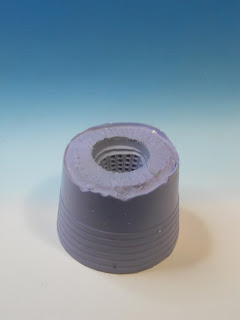 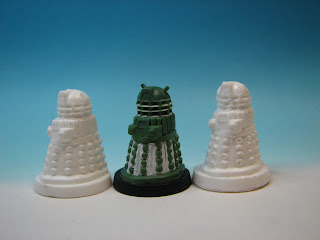