After sculpting a Dalek in green stuff, I tought it would be cool to make a mold of it and cast my own Dalek squad, so I could play the Doctor Who miniature Games Dalek scenarios.  After all, except on rare exceptions, Daleks are never exterminate alone.

So I did some research on metal and resin casting. I concluded that the easiest would be to create my mold with Room Time Vulcanization (RTV) Silicone and cast liquid resin plastic.


Given the scale of what I wanted to cast, I was able to get a lot of mileage out of a pint of resin.  I did not plan my molds and at each pour there was some loss, but here is what I was able to produce: 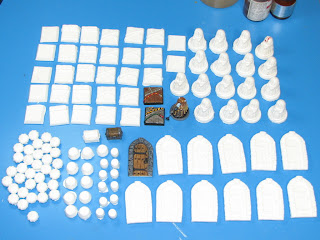 The barrels are from an oop fantasy miniature and the tires from a really old Majorette amphibian vehicle.  All other parts are my own sculpt, masters being made from green stuff, plasticard and Super Sculpey.  Here's a door and an industrial base I sculpted: 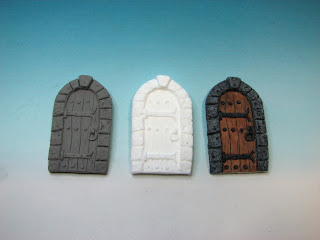 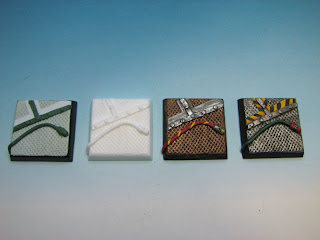 I plan on doing some more doors like airlocks, but I'll need to get a new kit as after 10 months+, the OOMOO left in in the jars was almost too thick to pour and the molds I made had too many bubbles. I had to throw it away.
Posted by Simon at 1/30/2011 11:34:00 pm No comments:

I've also been playing around with computers and electronic gadgets for a few decades and there too, there's a few things I'd like to share.

Basically, I wanted a place where I could discuss anything related to my hobbies or my favorite TV show, movie or book.  So this blog will be this place, my place.

I'm following the new Doctor Who series, and a couple of months ago, I discovered the Doctor Who Miniatures Game (DWMG). That's what sparked this idea for my first ever sculpting project, a Dalek! 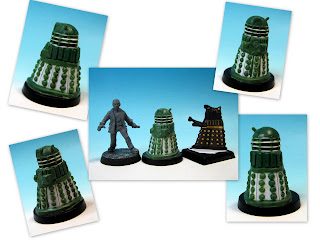 So following questions asked on the DWMG Yahoo! Group, here's a few tips about how I crafted my miniature Dalek.

First, I did some research on the Daleks to determine the proper dimensions and the relevant details.  Two sources that helped were the "2005 Series Dalek Plans" from project Dalek and the paper miniatures from The Crow's Nest, for scale comparison. 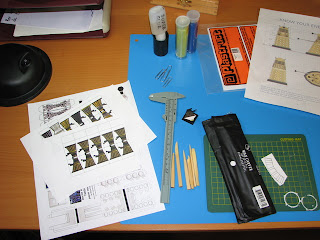 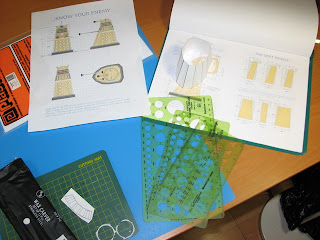 I printed page 4 from the Dalek Plans and covered it with millimetres approximation of each main feature. 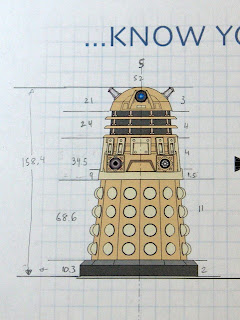 I also used the plan for the skirt panels to create a paper template that I then transferred to plasticard. Here you can see a larger paper test version and in the bottom, the 28mm scaled version. 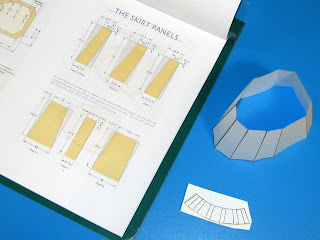 The resulting plasticard panels were then scored and folded like a paper model, and pressed onto the tapered lump of green stuff I started building on top a 25mm round slotted base.

Once that was cured, I added green stuff to build the neck section. Once cured, I shaped into a round lug with a blade and a file and using circle drafting templates as a gauge.


The neck rings and dome base were traced on plasticard using my old drafting templates and cut with a sharp blade Then I slid and glued them onto the neck section.  Ring support were later added with green stuff. 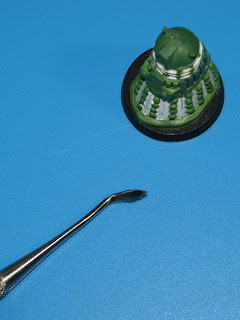 To achieve flat surfaces and sharp angles, I initially wanted to do many details like the slats and the gun box with plasticard, but it turned out easier to shape everything with green stuff.  Also, I did not know how I would do the hemispheres, but the easiest way was with epoxy again.  The only challenge was making them stick to the plasticard skirt.  I ended up drilling a hole with the pin-vise under each.  It gave them something to grab to. 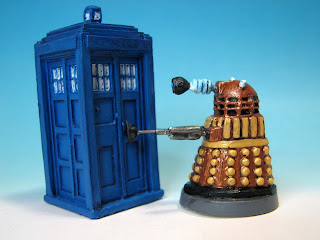 The eye stalk and plunger were done with green stuff on pins.  The gun is epoxy on a paper clip; I used a paper clip for the gun because it had a square cross section to facilitate the addition of the "fins".
That's about it. I had fun doing this project and even tough I see a lot of more amazing stuff around on the web, but as my first ever miniature sculpt, it proved to me that I am able to create something an inch high that really looks like a Dalek.
Posted by Simon at 1/07/2011 07:13:00 pm No comments: